11.4.11
On the weekend I finished the singles for Leon's next jumper. I have next week off and am going to three ply these. Each bobbin has 120 grams or more of singles on it, so hopefully this will make more than enough for a jumper. I'm not going to knit it until the end of winter, since I just realised that Leon is most likely to wear the last jumper I made him. Constantly. Then I make him a new one and he wears that all the time. 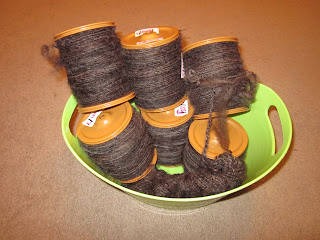 It's been interesting, doing my prep from fleece. I thought the washing would be the time consuming part, but it turns out that flicking it is took the longest. It actually took longer to flick the locks than actually spin them, but once I got into the rhythm of flicking I found it addicting. Just like I always say 'one more row" I found myself saying "one more clump of wool". I know it's not quite as poetic. And doing my own prep meant I have the locks exactly as I wanted them. Drafting freshly flicked locks of this wool was like drafting clouds.