Idle hands are the devils work


While I was cruising around the countryside I listened to audiobooks, something that I've been enjoying over the last couple of years. I was listened to Uncle Tom's Cabin, by Harriet Beecher Stow.  I was happily knitting away and listening to this tragic tale of slavery and freedom, when I was much surprised to come across a character, knitting. In fact, a couple of the characters knit. Gratifyingly, knitting is associated with rest, and calmness. One of the characters, Ruth is described as "calmly going on with her knitting" during a difficult situation. Another, Ophelia, knits "stockings which she kept as a specific against what Dr. Watts asserts to be a personal habit of Satan when people have idle hands". She is described as "knitting energetically", and pulls out her knitting when she is having an unpleasant conversation. She knits while she muses, and she is described as laying down her "ever ready knitting work." Another character, Aunt Dorcas, is described as knitting peacefully. Rather gratifyingly, all the characters who knit are positive and good people within the context of the book. They use their knitting just as I do, as something to do with their hands, as a way of being productive and to calm themselves down.
And, here's a picture of the pieces of my Spice Road. I've washed it, but haven't had a chance to sew it up yet. As intended, the gauge definitely changed in the wash! Now, rather than being scared it's too big I'm worried it might be too small. 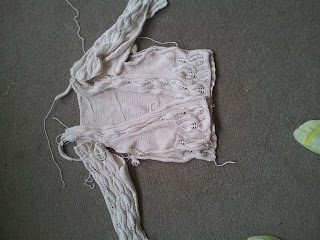