19.3.17
I was hanging out with Rachey the other night (Rachey is Elise's sister in law, and one of our favourite people). She has been poorly for a while and asked for some house socks. Sure, 8 ply socks, quick and easy. She want them longish, but because she's not eating enough, I don't need to do any calf shaping. 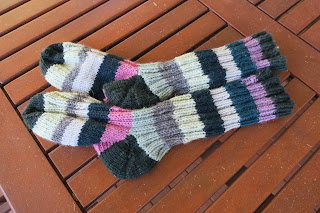 I pulled out my 8 ply scraps, and off I went. Because I couldn't be bothered weighing the yarn, I knit these socks two at a time on two sets of circulars. It worked quite well as a process, and I'd consider doing it like that again.

The socks themselves weigh 93 grams, and are just a simple 2x2 rib with a fish lips kiss heel.  Very quick, very fun, although there were rather a lot of ends to weave in! 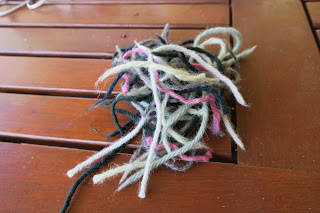 I hope these socks give Rachey as much joy the wear as they did me to knit.

17.11.19
Kate Davies is one of my very favourite designers. I have knit about 40 of her pattern over the years, and I generally like the way she writes her patterns. But sometimes she annoys the crap out of me.  I'm putting the button band of Kildalton and once again, I have to work out the ratios for myself because the pattern just gives a number, and I cropped it. As I ranted last time , just giving a number makes everything more difficult than giving a ratio. Also, there is no selve-edge stitch, and the cable goes right up to the edge, which means that the stitches are picked up from a wavy edge. I thought that was odd while I was doing the knitting , but made the mistake of trusting the pattern. All of that said, look how pretty those cables are. It's going to be a fabulous addition to my wardrobe - once I finish the button band and sleeves, so a little while to go yet, but putting aside my rant, it is a very enjoyable knit, and a well written pattern.
3 comments
Read more

Unravelling week 13 - and Yarn Along too

1.7.20
The balcony is finished! The scaffolding is almost down, and it looks really nice. They are putting scaffolding up on the bedroom side of the flat, but I won't be looking at it all day. Hearing the work, maybe, but I won't be doing a blow by blow account of that part of the renovations here. I never actually meant to do weekly updates of it, but nothing else was happening in my life for the last 13 weeks! Not a lot continues to happen. Leon and I have sore throats, running noses and a cough, so we go tested yesterday. It's very unlikely to be COVID, since the outbreaks here are happening on the other side of town, but we do have to self isolate until the test results come back. I'm reading Modern Lovers by Emma Straub. It was literally the oldest book in my Goodreads "To Be Read" list. It's a multi-generational family and friends drama. The fun part is that the drama is all actually quite low key. The characters are relatable and the New York settin
3 comments
Read more

1.4.20
What a week that was! I know we are all in the same boat (that boat being our own homes) it was my first week in lockdown, and it was not boring at all. They decided to go ahead with our building renovations, the scaffolding is going up today. I'm not pleased about loosing my balcony for the next 2 months, but it's kind of exciting to have something happening. People arriving and leaving and making noise, some rythm and action my days. Anyway, it's happening, so I may as well make the most of it, right?  I normally mediate on the balcony, so this morning I went into the building's courtyard. It's mainly a lightwell, but all but three plant pots have arrived in the last year, from where, I do not know. The only problem is that the windows on the left are straight into people's flats. I wouldn't work out or do anything that makes noise there, but it was a nice quiet place to sit and breathe. In reading and knitting I am working on all the same things I
1 comment
Read more