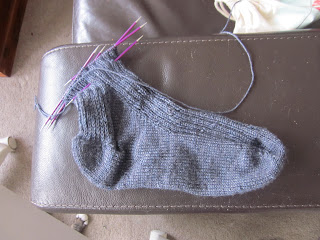 I stressed for a bit about what to do about Raph's sock. I couldn't get any more of the yarn, and I really wanted to use up all the yarn that I had. Eventually I decided to go toe up. I spent a little while converting, or rather trying to convert, the Hickory socks into a toe up, 72 stitch version, using David's toe up cookbook as a guide. After struggling for a while I realised that Raph doesn't care if his socks have a plain 2x2 rib or the wandering rib from the Hickory pattern. I cast on for 2x2 rib socks, and it's going well so far. 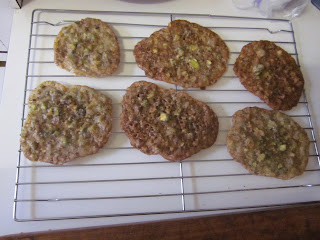 In other (almost) sock news, I made one of the Cookie A Recipes, a pistachio biscuit. They were delicious, although my tip for the day would be: if a recipe calls for 150 grams of salted pistachios, shelled, buy the shelled ones, because removing that number of shells takes forever.  The recipe said it would make 5 dozen, and I only got one dozen, so maybe my biscuits were huge. Either way, they were very tasty, and are especially good with cream - but then, what isn't? 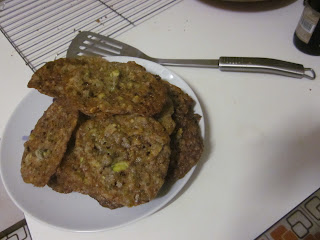