4.8.17
My Ardmore jumper is motoring along nicely. I’m moving down the second sleeve. It’s been a pleasant kind of knit.

Last weekend I went to the hairdresser, and Leon said he would mosey on to the fancy whisky shop. I asked him to buy some Ardmore whisky, because I thought, given the club, it was appropriate to match my whisky to my knitting. 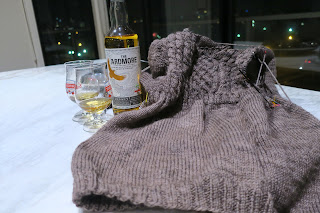 Although let’s face it, even without the club I would have thought it was funny.

So, Leon went to the fancy whisky shop, where he did not find Ardmore, but he did buy a delicious bottle of Ardberg. They he went to the normal bottle shop across the road and found the Ardmore, and bought that too.

The outcome being, I’m making a marvellous jumper and have a couple more bottles of wonderful whisky. Kate Davie's Inspired by Islay club just keeps on giving.