18.3.11
Anna is one of my best friends, and someone I knit for quite frequently. Knitting for her and her two kids is the gift that keeps on giving back to me. Like the baby blanket I knit for her now three year old, which I noticed in her car last week.Like the time Anna drove me to Wondoflex, and her baby was dressed in the jumper I knit her. Two Christmases ago I knit Anna a pair of Twinkletoes . A couple of weeks ago Anna was driving me to Shepparton - although we did stop at the Bendigo Woollen Mills, just because we could. Did I mention Anna doesn't even really knit? Anyway, she mentioned her grandmother, whom I have met a number of times, is in wheelchair now, and she can't wear shoes, because her feet are all gnarled up. The nursing home had bought her some slippers, that Anna described as incredibly ugly. Could I knit her some shoes, like the one's I knit Anna? Of course: 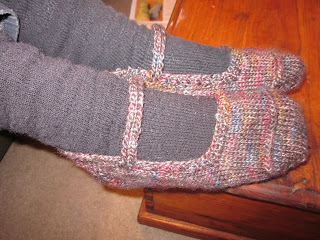 I used left over Collinette Art from my February lady sweater, which is a beautiful soft, yet reasonably strong, singles yarn, and I knew these will not be worn in the same way as if she was walking. I quite like the way they came out, in the end.

But I really didn't enjoy knitting them. I don't like short rows, and these are basically a short row toe and a short row heel, with a few rows of straight knitting in between. I did something weird with the provisional cast on. I think it looks fine here, but I'm going to have to learn how to not twist the stitches in a figure of 8 cast on. They looked terrible until they were finished, which may be the nature of the design. Until I had done the finishing I thought they were going to be ungiftable. Now they are done, I think they look nice, and I hope they give Anna's Grandmother some joy. 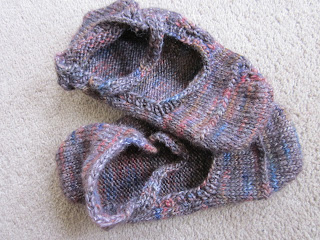