20.10.17
After my success the other week with redyeing yarn to make it Leon coloured, I HAD to do the same to this red: It is, I think, Regia, bought at Wangaratta in 2012. I like it well enough, but I can’t ever see me knitting it. It’s too one coloured for my dad, too red for Leon and I have a sock moratorium for myself. So, I did my research (i.e. asked the Richmond Knitters) and discovered that brown is made by mixing blue and yellow and red. I don’t have any yellow dye, but someone pointed out that yellow and blue  = green, and I have plenty of green dye: 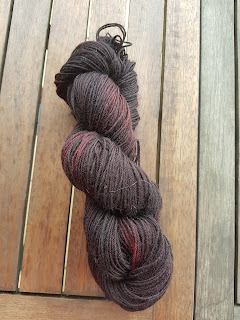 I applied it, and an hour later, I have some very usable brown yarn. Its a bit more variagated than I expected, but i think it's really pretty. now, what else can i dye?